Rugby in Ukiah: The Steam Donkeys are all about camaraderie
By Karen Rifkin
11/05/2013

For the Ukiah Daily Journal

The referee calls out “crouch, bind, set,” and the next moment eight guys, with arms interlocked and heads down, push forward against another set of eight guys in a similarly hooked-together formation in what’s called a scrum. That’s rugby, which some say is the fastest growing team sport in the United States.

The hooker, in the middle, with a prop to his right and a prop to his left make up the front line. Behind them are four more players and behind them a single man, the 8 man, at the back. The scrum half feeds the ball onto the ground, into the middle of the scrum, where the two teams fight for possession of the ball. The hooker uses his feet to push the ball to the back and not until it reaches the back of the scrum can the ball be picked up and only then by the half scrum or the 8 man.

Erik Harmon, a technology specialist by profession, has been playing with the Mendocino Steam Donkey team since its inception in 2006. A group of them met at his home, decided on a name indigenous to the area and took to the pitch (the 100-meter field).

“You move the ball backwards; you have to pass to someone behind you. Rugby is more a game about position on the field than possession of the ball,” Harmon explains. “There’s no blocking. The ball has to be pushed to the ground for a try (touchdown) and then you get to try for the kick. The area from where the ball is kicked is determined by the placement of the successful try. It’s 5 points for a try and 2 for a kick. In a very competitive game the score can be in single digits whereas in our games it’s usually double digits.”

Michael Winter, who hails from Sydney, Australia, now an electrician in Willits, has been playing since he was a kid. He’s a back, generally considered smaller, faster and more agile than the forwards.

“When I moved here I was ecstatic that there was an already-established team; I joined five years ago,” said Winter. “I love the camaraderie of our team; it’s a way to forget about work, paying bills and a way to come out and have fun. It’s an adrenaline rush; I get nervous before the game but once I am out there, after the first ruck, (a play where one or more players from each team, who are on their feet, in physical contact, close around the ball on the ground) it’s on.”

Luke Cuhns, a teacher in Willits, has been playing since college in Kansas and is starting his sixth year with the Steam Donkeys. He’s a forward, a generally bigger and stronger player, whose main responsibility is to gain and retain possession of the ball.

“I love the camaraderie of the team, the contact of the game, the continuous play,” he said. “I play prop, the head of the scrum. The game has two halves, 40 minutes each, and we are constantly moving, non-stop: tackling, sprinting, always with a certain degree of fatigue. During the game there are a limited number of substitutions and 8 of the original players are going to play the entire game. Fitness is key to survival on the field.”

There are 15 players on the field at one time, and when one of them gets tackled, he places the ball on the ground towards his own team. Either team can pick it up. When tackling, players wrap their arms around an opponent, somewhere below the shoulders; they don’t slam into each other as they do in football. With no equipment for protection, it is considered to be a safe contact sport; players tackle with their own well being in mind, not putting themselves in a position to get injured.

Harmon says, “The brotherhood we have built here is not like any other sport I have played. It’s very egalitarian where we end up defending each other. There’s a lot of focus on team bonding. Our team is somewhat unique in the fact that we have grown through adversity; we’ve been beaten up a great deal. We don’t have a college team that feeds into us; most of us have never played before; we are a team of rookies.

“There’s a wonderful social aspect that crosses team rivalry boundaries; with rugby the home team hosts a social party after the game,” Harmon continues. “There’s 80 minutes on the pitch and a three-hour party afterward; it’s part of the ritual and culture of the game and it’s always a good time. What happens on the field stays there.”

Although it’s hard for Aussie Winter to admit that the last team to hold the Olympic rugby title was the United States in 1924, he is excited to say that rugby will be the newest Olympic sport added to the the games in Rio de Janeiro in 2016.

The team is recruiting for this year’s season and no experience is necessary. If you are interested in being a part of the brotherhood and community group that is Mendocino rugby, call or email Manny at 707-367-4915, mannygriego.mg@gmail.com. Or, stop on by a practice at Vinewood Park on Tuesdays and Thursday. 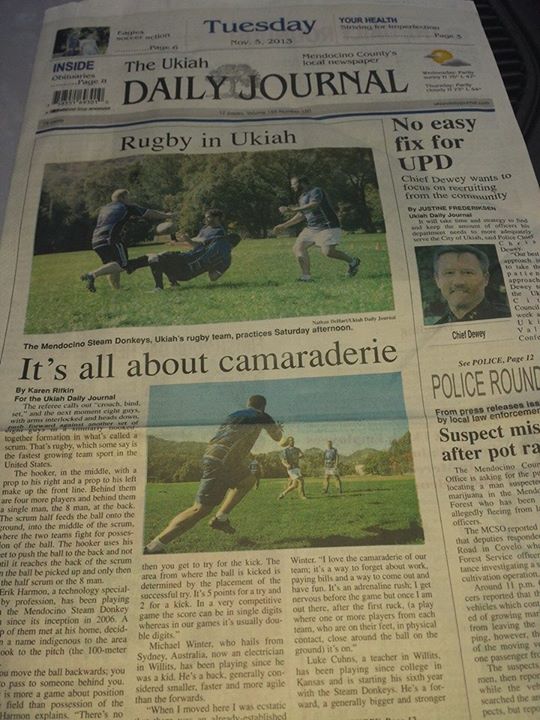