Special to the Ukiah Daily Journal
By JOSHUA LANDERS

Every Mendocino vs. Humboldt rugby match is exciting. The contest on Saturday, March 16, in Ukiah was no different. Both squads stepped onto the pitch (field) expecting a hard hitting battle and neither side would be disappointed. With the hopes of taking home the coveted Emerald Cup on the line, the two clubs appeared ready to play for bragging rights in this continuing rivalry. On this particular day though, the Mendocino Steam Donkeys seemed to be the team with something more to prove.

After somewhat of a sloppy start by both clubs, Mendocino committed the first penalty of the match within their own 22-meter line. This mistake led to an early lead for Humboldt, who opted to kick for points, and took a 3-0 lead at the eight minute mark.

But soon the visiting club would make a mistake of their own. Eleven minutes into the match, the referee called a penalty on a Humboldt player for not binding onto the man across from him in the scrum. Mendocino quickly took advantage of the ten-meter penalty when the fly-half Manny Griego quick-tapped the ball (tapping the ball with your foot and then catching it) and ran 50 meters to score a try (touching the ball down across the try line). After Manny Griego converted the kick, the Steam Donkeys led 7-3.

Twenty minutes in, Mendocino’s front line was able to secure the scrum at the 5-meter mark directly in front of the posts (uprights). The scrum-half Liam Kidd moved the ball out to the back line for some open field running. With a nice pass from Griego, the outside center Joshua Landers snatched the ball, eluded a few defenders, and scored a try to the corner of the try zone. Although Griego missed the kick, Mendocino still held a solid 12-3 lead.

Humboldt wouldn’t go away that easily though. A little more than halfway through the first half, a penalty went in Humboldt’s favor on Mendocino’s 5-meter line. A visiting player quick tapped and scored a try just left of the posts, making the score 12-8 after also missing the kick.

With just a minute to go until the half, Mendocino’s defense made a big stop by tackling a Humboldt player inside their own try zone, giving the Steam Donkeys the ball back on the 5-meter line and an opportunity to score before the break.

After yet another solid scrum by the forwards, inside center Dillon Campbell set the tone by running the ball hard within 2 meters of the try line. Although he wasn’t able to score, the Steam Donkeys wouldn’t be denied for long.

With the grinding determination of the big boys (and girl) up front, the forwards were able to put points on the board after the 40-minute mark when flanker Erik Harmon extended the ball across the try line, giving Mendocino a 17-8 lead. Before both squads went to the sidelines, Manny Griego converted another kick and bolstered that lead to 19-8.

After the break, Humboldt stormed out of the gates. Four minutes into the second half, they were able to work the ball 50 meters and score a quick try under the posts, cutting into Mendocino’s lead. A converted kick made the score 19-15.

he match ground on. Near the hour mark, Mendocino’s No. 8 man, Ryan Morris, broke off a solid run near the 50-meter line, only to be tackled by a pair of defenders 22 meters away from the try zone. But in a heads-up play by Morris, he never stopped looking for a pass to make. From the ground he sent up a quick pop pass to fellow Steam Donkey Joe Martin, who’d been running behind for support. Martin scampered the remaining 22 meters to score the try. Griego did not convert the kick. Mendocino was up 24-15.

With less than eight minutes left in the match, Mendocino started to prove themselves as the more energized team. Their tackling remained solid, their passing crisp. No other time was this latter point shown than at the 73 minute mark. Around the 50 meter line, with a series of accurate passes from several players, Dillon Campbell caught the ball and skirted along the sideline.

As he was about to get tackled out of bounds by two Humboldt defenders, he tossed a no-look pass behind his back to his brother Brandon Campbell, who used his speed to outrun the rest of the defenders and score Mendocino’s final try of the game.

While Humboldt remained stunned, Manny Griego went ahead and converted the kick, giving the Steam Donkeys the last score of the game, the claim to the Emerald Cup, and bragging rights for this heated rivalry. At least, that is, until both squads meet again next season. 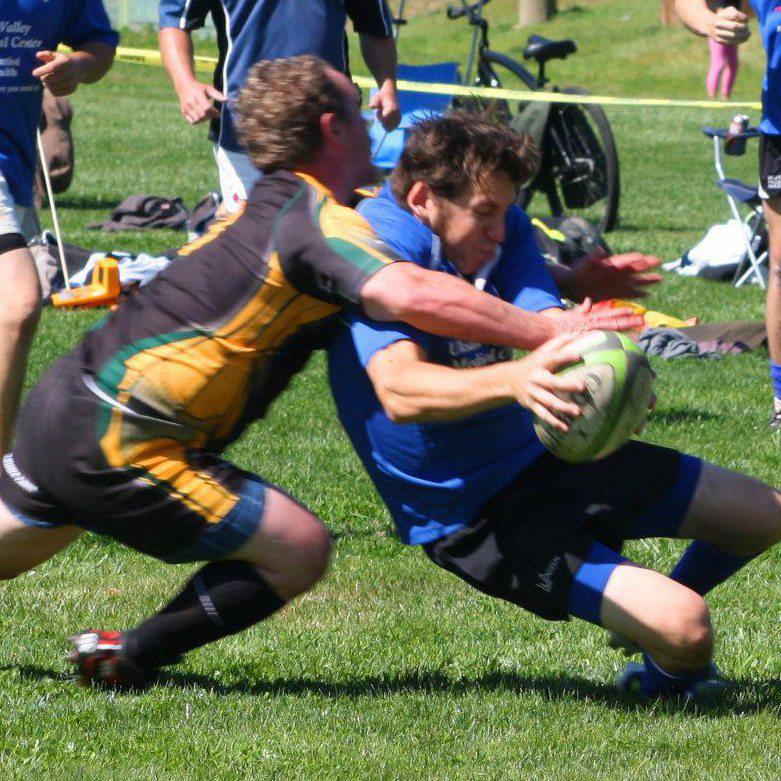