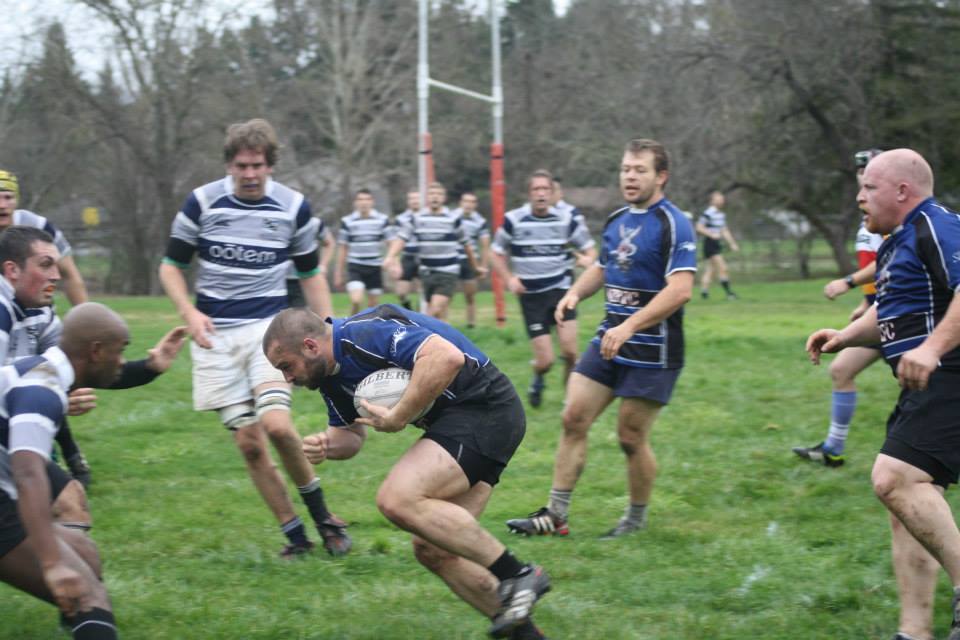 Pride. Determination. Execution. These are always staple characteristics of the Mendocino Steam Donkeys. This past Saturday they displayed them even more in a convincing win over the visiting San Francisco Fog.

It was a cool, rainy day in Ukiah, and with the pitch already wet and muddy from a previous storm, the Steam Donkeys had prepared for sloppy conditions. It definitely showed in their play. They determined the pace of the game right off the bat.

Although the Fog received the first kick-off, the Steam Donkeys quickly retained the ball off a turnover. With some hard running, crisp passing, and continuing to push the ball down the field, Micheal Wellington received a pass from Manny Griego, skirted up the sideline and burst across the try line for Mendocino’s first score of the day, giving the home team a 5-0 edge early on.

It wouldn’t take long for the club to score again. A couple of possessions later, Griego sent a kick into the try zone, where winger Wellington ran down the ball and pounced on top of it for yet another try, his second of the day. After Griego sailed a two-point conversion sailed through the uprights, the score was 12-0.

But the Steam Donkeys wanted more before half-time. Tyler Thomas, Mendocino’s 8-man, barreled through a few defenders across the try line. With a few minutes to spare, he touched the ball down for the home club’s third score of the half.

Not every thing went perfectly, of course. No match ever does. At one point during the first 40 minutes, the Steam Donkeys defense had a minor slip up and allowed the Fog’s inside center to break through the defense, scamper along the sideline and score the visiting team’s only try in the first half. At the break, the score was 17-5.

As the second half began, the rain started falling harder but didn’t slow the home club’s momentum. The Steam Donkey’s continued displaying their strength and ball handling skills as they retained possession for much of the first 20 minutes, scoring two more tries.

Robert Garbocci received an offload from one of the backs and rumbled through the heart of the Fog’s defenders for an impressive try, his first of the season. Soon after that, outside center Emmanuel Natividad exploded past several San Francisco players and dove into the try zone for yet another score. Griego provided two more points with his kick conversion, pushing the score to a demanding 29-5.

With the second half coming to an end, victory was imminent for the Steam Donkey’s, but of course, no club can be counted out. Rugby is all about pride and competiveness.

As time dwindled away in the match, the Fog managed to score once more before the final whistle blew, cutting the lead to a more respectable 29-12.

This win was truly a team victory for the Steam Donkey’s. The defense was stout, the offense unselfish, and the camaraderie among players high. All of these aspects are pure testaments to the Steam Donkeys as a club, a team undoubtedly on the rise.

The next match up for the Mendocino club takes place Saturday, February 22 against the State of Jefferson Rugby Football Club in Yreka, California. The next home game is on Saturday, March 1 in a rematch against Humboldt Old Growth.

The Mendocino Steam Donkey’s would like to thank the Mendocino Brewing Company and its Ale House for hosting the social this past Saturday, and hopefully starting a new tradition for post-game celebrations after each of their home games.